I drove a couple thousand miles, flew a few thousand more, met many wonderful people, read poems, heard poems, wrote poems, and ended the month profoundly grateful.  Let me just try to describe this last Saturday:  I spent the late morning and early afternoon at the Pacific Bonsai Museum in Federal Way; it’s a zenlike space, filled with these stunning Bonsai that have been cultivated for many, many years:  some are hefty appearing (even though they are small); some are calligraphic in their grace.

I had the privilege of walking around and experiencing these forms, and then I started tuning in the exhibit–I knew what the theme was, but it didn’t really register until I saw it in person.  DECKED OUT:  FROM SCROLL TO SKATEBOARD grinds out a sharp juxtaposition between the meditative calm of the Bonsai and the clattering frenzy that is skateboarding and brings them together through skateboard decks functioning as the traditional scrolls that accompany Bonsai plants.  Here’s an example:

It’s well worth a visit for this exhibit alone–but we were also doing poetry stuff, and at about two o’clock, folks started gathering near the poetry tent organized by the wonderful folks at The King Country Library system.  About a dozen or so of us heard some poems, talked about poems, and then wrote some great drafts. I was so impressed by the poems that the writers in this group made. 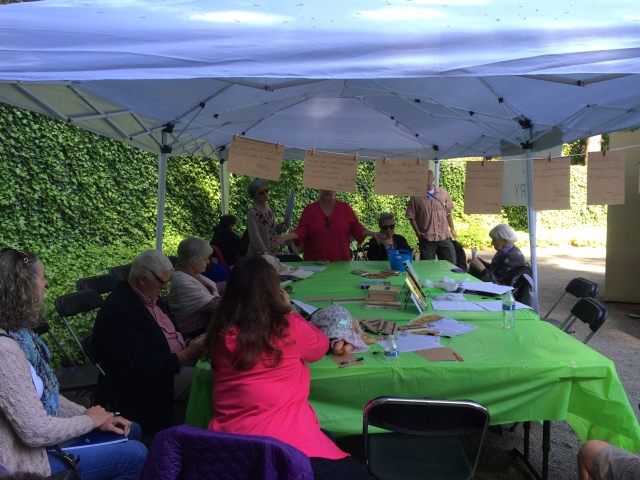 When the event ended, I jumped in my car and zoomed (well, sort of crawled down I-5) toward Tacoma Community College; I made it in time for the last hour and half of LTAB, and I was so, so glad that I did.

I heard funny poems; I heard many finely crafted poems; I heard poems that cut and poems that burned.  I heard poems driven by visceral anger and pain that seemed to defy articulation–and yet some of these young people were finding words that were somehow up to the task of speaking the unspeakable.  When the event’s organizer, Michael Haeflinger, someone the kids obviously respect and trust, paused the performances so that he could share poems by teens who couldn’t be there because they were locked up, well, I lost it.  As Mike so clearly pointed out:  these voices need to be heard, and their poems about racism and disappointment spoke powerfully to the stark and brutal divisions in our country.  When the last of the recorded poems ended, there was a hush over the audience for a few moments, and then enthusiastic applause that sounded appreciation and solidarity.  The whole afternoon was driven by mutual respect (and there was a great crowd in the auditorium).  When the event ended, I felt so thankful for the opportunity to listen.

It was a long drive back to Spokane, but April had given me a lot to think about, and so that’s what I did until I’d made it over the mountains and the travel started catching up with me, and I needed some music to sing along with as The Cascades became the Columbia became crop markers by Moses Lake became Ritzville became Sprague and Fish Lake and then Maple Street exit and, finally, home.