As we approach the deadline for the WA 129 project, I thought that it might be useful to share a few directives that have always helped me when working on my own writing—both in generating new poems and thinking through older drafts.

The rather eventful last month took me to many wonderful places in our state:  Yakima (see Mark Fuzie in a photo below) and Woodinville, Redmond and Tulip (what an amazing cultural center), as well as return trips to Metaline Falls and Ritzville (we made poems!).  I also gave talks on Walt Whitman and Emily Dickinson, “What Fiction Writers Can Learn from Poetry,” and met with the wonderful Rotarian Club of Lake City, Washington!  And so much more: I had a chance to listen to hear Brenda Hillman (see her below in Capitol Hill as part of the fantastic Cascadia Poetry Festival), Heather McHugh, and so many other wonderful poets, including the energetic crew at the Everett Poetry Nite. 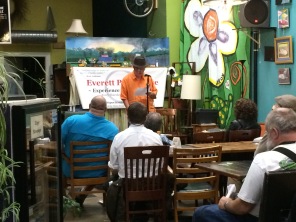 I’m looking forward to my last few trips of 2016–to Lacey, Seattle, and Tacoma; Curlew and Republic, Chewelah, Soap Lake, and Ephrata.